Since its independence from British rule in 1956, Sudan has suffered a protracted civil war–one of the deadliest in Africa–which led to the secession of its southern region in 2011. Despite the separation of the South, Sudan has never tasted peace on both sides. Civil wars, repression, together with international sanctions and isolation led to economic collapse and unbearable living conditions. As a result, in December 2018, Sudanese people stood up against general Bashir’s 30 year old autocratic government. In less than three months the pro-democracy nonviolent movement forced general Bashir to step down, leading to the formation of a Transitional Military Council (TMC) to take power. The protests and sit-ins continued aiming to pressure the TMC to hand over power to civilians and allow the formation of a fully civilian-led transitional government through the interim period. 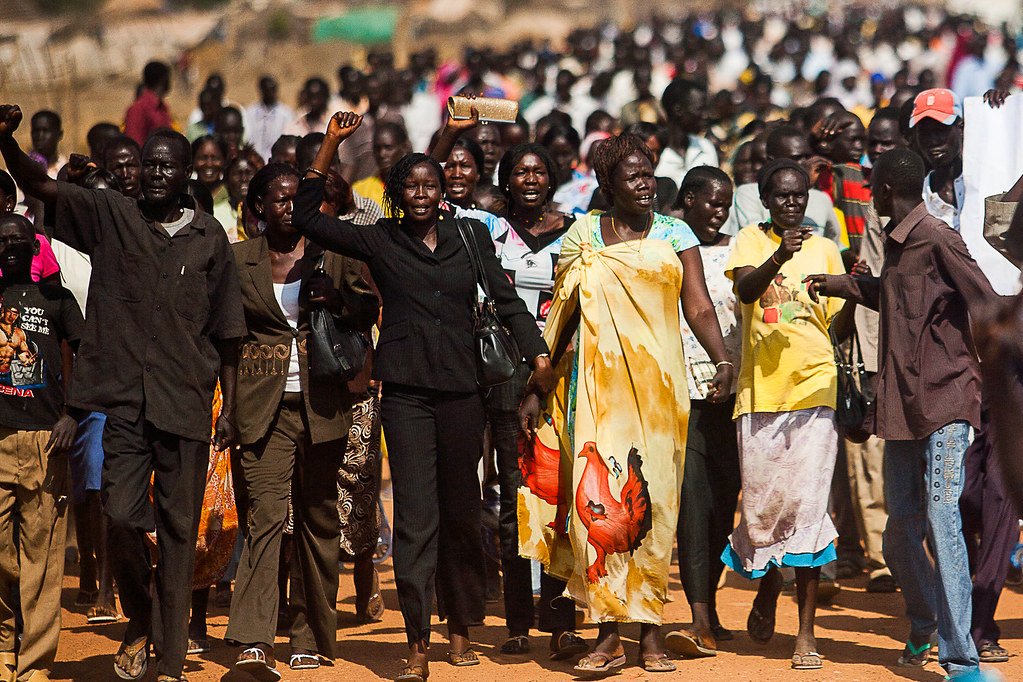 “Abyei Citizens March in Protest” by Enough Project is licensed under CC BY-NC-ND 2.0

Sudanese people have a long history of leading successful pro-democracy movements against their military dictators. The first was in October 1964 when the Sudanese uprising ousted general Abbouda’s government and restored democracy. A few years after that movement, General Jaffar Numeri made another military coup. After 17 years of autocratic rule, Numeri was again ousted by the April 1985 uprising. In 1989, General Bashir led another military coup, this time under the National Islamic Movement. Bashir’s government was the most stringent, combining the Islamist party and their affiliates into the Sudan Armed Forces (SAF). Under the Bashir regime, the Sudanese people endured almost 30 years of Sudan’s darkest political era, leading to the country dividing in two, the indictment of the president by the International Criminal Court (ICC), militarized societies, and a destroyed economy and state apparatus.

Learning from their long-inherited experiences and regional experiences such as the Arab Spring and the Ethiopian Movement, Sudanese revolutionaries managed to overcome the most notorious regime in less than three months. The December 19, 2018, movement led by the Sudanese Professional Association (SPA) and allies now faces a big question. Will the revolution break the prolonged cycle of political failure and establish a lasting democracy in Sudan? This presentation analyzes the Sudanese December 19 movement and discusses the context, actors and their roles, the movement building tactics, strategies achievements, and prospects. Mohamed “Quscondy” Abdulshafi is a human rights activist and independent research consultant working with various organizations in peacebuilding and governance research. He’s a founding member of Darfur Student Movement, a student-led nonviolent movement against the genocide in Darfur. Quscondy is a winner of the Civil Society Leadership Award from the Open Society Foundations. Previously, he was a research fellow at Peace Direct. He was a founding staff the Sudan Democracy First Group, where he worked for several years in Kampala, Uganda. His research interests include inclusive peacebuilding, governance and youth participation.

How did you manage that protesters do not feel provoked and fall into violence? How did you handle agents provocateurs?

Since the beginning, the protests in Sudan were well organized to maintain nonviolent discipline. At every nonviolent event, some leaders were tasked with watching the group to monitor and prevent a turn to violence. On several occasions provocateurs tried to provoke violence, but protest monitors were able to identify such incidents.

Do you agree with the exclusion of the NCP and the PCP from the current negotiations?

Yes, I do agree. The ongoing negotiations aim to establish a transitional government with the sole responsibility to reform the damage made in the last 30 years. The NCP and the PCP are the parties that brought Sudan into the current dilemma, and they cannot fix what they damaged. Importantly, the transitional government is responsible for justice, accountability, and reparations. It makes no sense to have the perpetrators administering justice for crimes they themselves committed.

Should the pro-democracy movement place any trust in Hemeti, the architect of the Darfur atrocities?

Hemeti represents the most significant threat to not only the success of the transitional government negotiation but to the awaited democratic transformation. Embracing Hemeti means neglecting justice and accountability, which is dangerous not only for democracy but to national unity itself. The victims of war crimes might not accept taking part in any future arrangements without recognition and justice for the crimes committed in conflict regions.

Do you think there might be an inter-religious conflict in Sudan, given the recent Islamists who have been organizing their protests and calling for the adoption of Sharia? For example, Mohamed Elgizouli, a leader of the radical Movement of the Support of Sharia and the Rule of Law, allegedly threatened war if power is handed to a civilian government.

I think the ultra-right Islamists present a future challenge to peace and democracy. However, the day I saw the Popular Congress Party members beaten by youth chanting no place for religion traders, I came to believe that there is no political future for the Islamists in Sudan. The future Sudan is either democratic and inclusive or there is no Sudan at all. Therefore, I don’t believe that in the near future we’ll see Islamists rallying the public for war using religious rhetoric as in the 1990s.

How was the nonviolent resistance movement in regions such as Darfur and South Kordofan, where violence was systematically used?

The regime’s security system was built on systemic racial and ethnic oppression. As a result, the armed conflict and genocide were in regions with majority African ethnic populations. The nonviolent movement’s success in Sudan was because it was sparked in the constituencies where the regime claimed to represent their interests and identities. This made it hard for the regime to use the same brutal tactics it used in the conflict regions. Another reason is that in Darfur and other conflict regions, there is an active state of emergency which legally justifies the use of excessive force.

Who are the core group of 8 unions that make up the Sudanese Professional Association?

The Central Committee of Physicians initiated the December movement. They were then joined by (2) the Pharmacist’s Union, (3) the Legitimate Doctors Syndicate, (4) the Sudanese Journalists Network, (5) Bar of Democratic Lawyers, (6) the Teachers’ Committee, (7) the Association of Veterinarians, and (8) the Engineers Initiative. It’s important to note that the physicians have two representing bodies. The Alliance of University Professors was the first group to join the 8 SPA alliance.