In the year 2000, in a war barely noticed outside Yugoslavia, the indicted war criminal Slobodan Milosevic fought to hold power. He controlled a battle-hardened army, a tough police force, and most of the news media. But he underestimated his opponents, led by a student movement called Otpor! (‘resistance’), who attacked the regime with ridicule, rock music, and a willingness to be arrested. Their courage and audacity inspired others to overcome their fear and join the fight.

Otpor! students were the shock troops in what became an army of human rights and pro-democracy activists who systematically undermined police and army loyalty to Milosevic and forced him to call early elections. When Milosevic refused to accept his defeat at the polls, the people responded with a general strike. As normal life ground to a halt, Serbs by the hundreds of thousands descended on the capital on October 5 to seize the parliament in a dramatic triumph for democracy. Milosevic was arrested and extradited to the Hague to stand trial for crimes against humanity in June 2001.

“A priceless history lesson… succeeds most intriguingly as a how-to manual for revolution via civil disobedience. Grade A.”
–Entertainment Weekly

“…remarkable and inspiring…. a fascinating window on a revolution that was given limited coverage by America’s 24-hour news services.”
–Kevin McDonough, United Feature

“… a good short primer… as the narrator, Martin Sheen, says in a compelling concluding segment, Otpor’s success suggests that oppressive leaders can best be toppled not by outside military force, but by grassroots movements from within.”
–Neil Genzlinger, The New York Times

“… an inspiring story on courage in the face of unspeakable cruelty.”
–The Christian Science Monitor 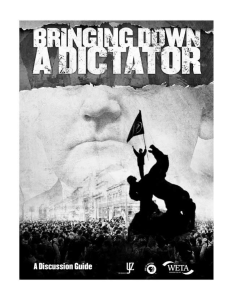 A 13-page Discussion Guide is available as a free downloadable PDF file.

Designed for use by informal groups as well as in classroom settings, the Discussion Guide contains background information, topics for discussion, activities, research topics, and a list of resources.

Lesson I: The Role Images Play

Lesson II: Symbolism and Otpor’s Use of the Clenched Fist

You can find more educational resources on civil resistance in French and over 65 languages in our Resource Library.